THANKS TO PIPPO AND XI ZONE PARTISANS

"From 6 October 1944 to 8 May 1945, Pippo and the Group under his Command have faithfully served as combat in the Serchio and Lima Valleys, Italy Sector.
During this period of eight months the afore mentioned Group of Partisans performed in an excellent manner and were of valuable service to the Command in their Sector.
Their work consisted of regular combat activities and Intelligence Missions which were of highest value to the Allied Command.
This Formation during the months of October to April held frontline positions North of Bagni di Lucca and during the 5th Army advance, covered the left flank of IV Corps as far as Milano.
This Headquarters wishes to take this opportunity to thank You and Your brave Group of 675 Partisans, for the magnificent contribution that You have made towards the Liberation of Italy from Nazi and Fascist oppressors."
http://xoomer.virgilio.it/laurapog/PIPPO/rossetti.htm


HIS STORY
Manrico Ducceschi was born on September 11, 1920 in Capua (Caserta) from Fernando Ducceschi and Matilde Bonaccio. He also had a smaller sister, Leila. The birth in Capua was absolutely casual, due to a trip of his mother, in fact the family came from Pistoia, a town situated close to Florence, where Manrico grew up and finisched his studies. Later, he choosed to go to the university in Florence, PhD Faculty, which  he brightly attended.
He however interrupted his studies as he attended the Military Academy and later, on events of September 8, 1943, when the Italian Armg was dissolved,he came home from Tarquinia, where he was at that time, on foot, avoiding the principal roads just to avoid the risk to be captured by Germans.
Strong of his military experience as Alpine Official, he immediately got in touch with the Florentinian group "Giustizia e Libertà" (Justice and Liberty) and he had the chance to form a mobile group of Patriots with the purpose to create troubles to the Nazi army in Italy. Then, his exceptional abilities as commander let him always have loads of combacting Patriots around him, just to fight with him, so that it was possible to form  one of the most organized and combative existing Patriot bands in Italy. In fact, the 11th Military Patriots Zone was one of the few Formations of Partisan which enumerates victories and it doesn't suffer military defeats. 0ne of these, was the killing of an important Japanese Admiral, in Piano Sinatico (on Abetone road) on June 1944, which permitted to catch important documents for the future developments of the War in the Pacific Ocean area.
His position in partisan actions put him at the top in the "most wanted" German chase list, putting in serious danger not only him, but even all his relatives, who were forced to disperse for the whole period of the war and to hide themselves. Once, to escape to a German raking, his mother and his sister needed to hide themselves in a funeral wagon, faking mother and sister of the corpse.
Loved by his people and respected by the enemies, "Pippo" (Manrico's fight nickname) was one of the few to arrive as first in Milan with his group. He was decorated by the U.S. with the "Bronze Star" Medal, delivered to him in Santini Building, in Lucca. Despite all his undisputed heroic enterprises, however, no medals came from any Italian political Party, despite to the promise of a "post-mortem" monument in the town of Pistoia, so that his corpse was moved from Lucca, where he died, to Pistoia, where he still lies.
On August 24, 1948, "Pippo" had to go to Rome but he already preannounced that, pm his return, he had reported facts and circumstances concerning some partisan groups. His father first found him, when he searched for "Pippo" being worried for his son's silence, in the house, hung with the belt of his own pants and so it begins the mystery related to his death.
A lot of inferences were subsequently made but, even if the official version remains "suicide", many elements throw a great deal in a different light on this mysterious epilogue. 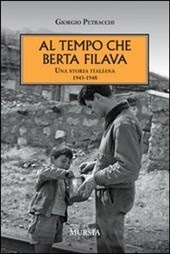